It was likely a regular day for Joseph Schawb of Solano County, California. He was driving home from his job as a union glazier when he suddenly saw flashing lights in his mirror. He wasn’t speeding, and he hadn’t been drinking or doing drugs. The officer from the California alcoholic beverage control department claimed he had been driving ‘erratically’ and had cut her off.

Fortunately for Schawb, he was quite sober. So of course when he blew a 0.00% into the breathalyzer he was given, the officer immediately let him go with a warning.

After blowing 0.00%, Schawb was dragged to the county jail and had his blood drawn. He was tested for 8 different illegal (and legal) substances. Every single test came back negative. Schawb had quite a hassle, but luckily the blood test proved conclusively that he was not under the influence of drugs or alcohol. Problem solved…right?

Not quite. It appears Mr. Schawb’s blood sample was forwarded to a lab in Pennsylvania (remember, he was detained in California), and screened again months later. The incident originally occurred in August of 2015. On June 6th, 2016, formal charges were brought against Mr. Schawb for driving under the influence. Of what substance you ask? 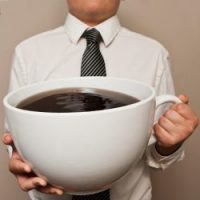 Now, it is true that California vehicle code classifies a drug as “any substance besides alcohol that could impair a persons ability to drive to an appreciable degree”, however, it’s difficult to imagine a scenario involving enough caffeine to seriously impair a human being.

The ludicrous nature of this case seems entirely lost on the prosecution, as they have given no indication that they plan on dropping the case which, barring a last minute dismissal, is due to hit the courtroom on January 11th.

The Police are NOT on your side. The Prosecution, is NOT on your side. They can and will do anything they can to land a conviction. This case may be unique because of the unusual nature of the charge, but the actions of the overzealous officer and prosecution are NOT. Make sure your rights are protected, get yourself a FORMER PROSECUTOR today.