In November of 2016, Josh Kuiper from the Grand Rapids Prosecutor’s office made a serious mistake. He allegedly drove while heavily intoxicated. After driving the wrong way, his automobile crashed into a parked car and then knocked down a pedestrian before he finally stopped. Luckily it appears there were no serious injuries. Three Grand Rapids officers responded to the incident and appeared to discuss ‘passing him on sobriety’. 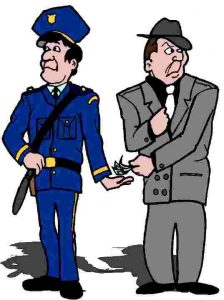 One of the responding officers, Matthew Janiskee, discussed his wife Monica Janiskee as well. Mrs. Janiskee is currently an assistant prosecutor in the Grand Rapids office. When presented with concerns that his wife might dig into the case, Janiskee responded that she won’t, because he would get “pissed”.

Grand Rapids City Manager and Police Chief have both responded to this recording with disgust, adding that they hope the people understand that this is not regular police behavior and that they also hope that this incident will not make people lose faith in the police department. To that we say, good luck.

This incident happened to be caught on tape. Imagine how many similar incidents have likely occurred, that never saw the light of day. The police and prosecutors are NOT on your side. They will look out for each other at your expense, every. single. time. Don’t let their tricks cost you your freedom. Get yourself a Former Prosecutor now!