Shooter Mcgavin might have been an ace on the golf course, but he can’t seem to find a way to operate as smoothly on the road. Actor Christopher McDonald was arrested for DUI last week by the California Highway Patrol for the second time since 2013 after crashing his Porsche into a gas pump. 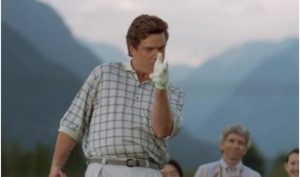 Allegedly, McDonald told police about his starring role in the popular Adam Sandler film Happy Gilmore. If he was hoping it would grant him some leniency, he was sorely mistaken. McDonald was taken into custody by the highway patrol and booked on one count of driving under the influence.

His 2013 arrest was in North Carolina. According to his Twitter account, he appeared to be enjoying Oktoberfest before this recent accident and arrest. The case will no doubt take some time to go to court, but based on the available evidence, it appears the prosecution may have themselves a hole in one.