Annie Dookhan was a regular American success story. She immigrated to the United States at a young age with her parents from Trinidad and eventually gained her citizenship, along with a stellar career as a renowned chemist with the Middlesex county prosecutors office working out of the Hinton State Laboratory in Boston. She quickly gained a reputation as a hard worker who could be depended on to sift through and process hundreds of samples in a short period of time.

Her work ethic and productivity were incredible, and many of her co-workers began to suspect that her good work perhaps was a little too good. They were right. 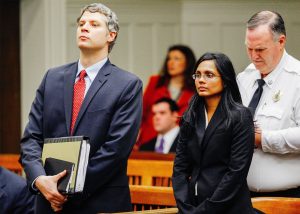 Dookhan was arrested and later pled guilty to obstruction of justice and falsifying records in 2012. Investigators speculate that internal departmental changes put added pressure on Dookhan to perform and obtain faster results. This led to her incorrectly identifying and labeling thousands of samples as positive for controlled substances, sending countless innocents to prison in the process.

This is not the first time we have reported on corrupt and incompetent lab technicians leading to many false convictions and it certainly will not be the last. Depending on the justice system to give you a fair shake is a recipe for disaster. Make sure your rights as a defendant are being respected with a fair trial and honest findings. Get yourself a Former Prosecutor today!