The DUI laws of every state are laid out in great detail for all of the visitors of DUI.Attorney to see. Some states, like Arizona, are notorious for their harsh DUI penalties. However for the vast majority of states, the penalties fall within generally accepted parameters. Sure, the fines may fluctuate slightly, and some places may require ignition interlocks regardless of the severity of the offense. But all of these things are considered fairly normal.

In some rare instances, a state may require a person registering a vehicle after a DUI conviction to be assigned a special license plate. In most cases the only difference between a regular license plate and one of these special ones is a small set of numbers placed inconspicuously on the plate. These numbers are there in order for law enforcement officials to be able to identify past offenders on the road with ease. Ohio imposes this penalty as well, but executes it just a tad differently.

Now let’s compare that to your average Ohio plate: 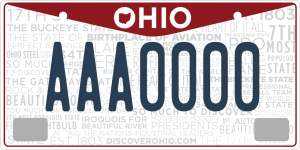 That’s right folks. You end up with a DUI conviction in Ohio, and law enforcement will be able to spot you a mile away.

Well, law enforcement, potential employers, your mother-in-law, the local paper, and low flying planes. Just to name a few. You may have regained your driving privileges, but you’ve also gained a giant yellow bullseye on your back that will be attracting all sorts of the wrong attention your way.

Without experienced, competent representation, this is a scenario that you may very well be forced to live with. Don’t get marked, get yourself a FORMER PROSECUTOR now!